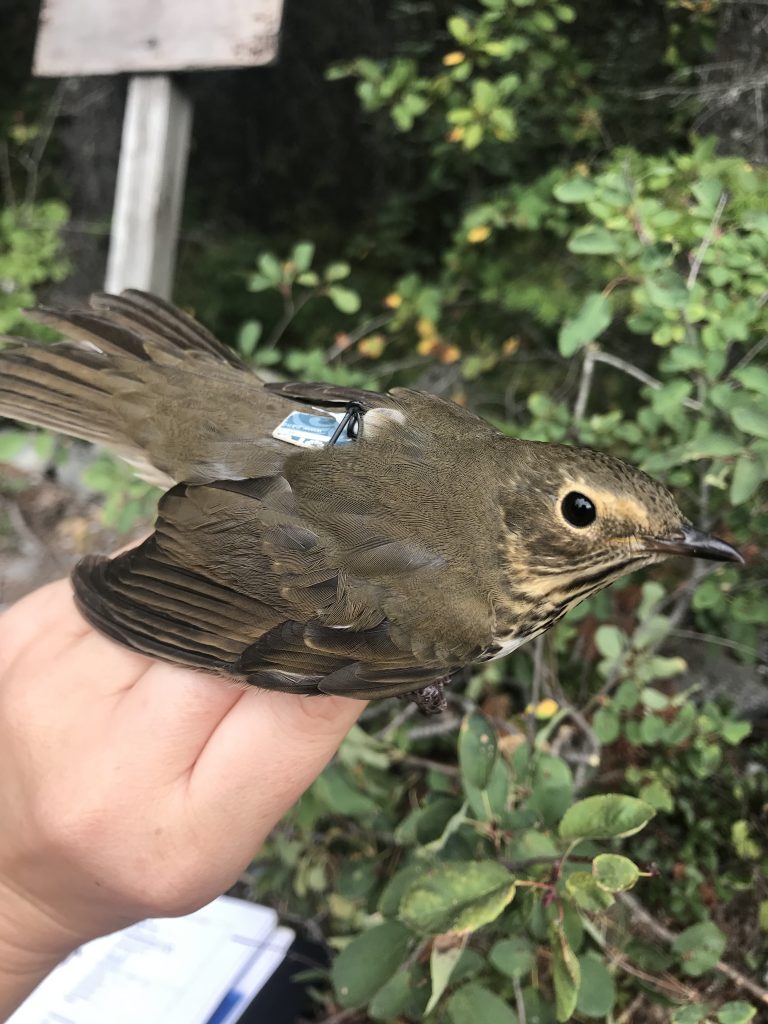 Every spring, nature enthusiasts are excited for another bird migration made evident by the countless posts on social media noting rare warblers spotted in backyards and high species counts on birding trips. And the excitement is warranted, as migration is an amazing feat, both ubiquitous and complex, requiring coordination of numerous adaptations for the birds to undergo long-distance flight (Dingle & Drake 2007).

Most songbirds migrate alone and at night, which means that they cannot learn the migratory route from more experienced conspecifics. Evidence suggests that there is a genetic basis of migration, controlling all aspects from timing to orientation of the flight (Delmore & Liedvogel 2016). However, most of the causative genes of this behavior have yet to be identified. Our research goal is to use whole-genome sequencing to identify specific regions in the genome under selection and associated with divergent migratory phenotypes to narrow in on genes that control the behavior.

We study the Swainson’s thrush (Catharus ustulatus), a small long-distance migrant that consists of two subspecies groups, the coastal and the inland group, that form a migratory divide in British Columbia (Figure 1). A migratory divide occurs when two closely related groups of birds exhibit differential migratory routes, but overlap in distribution for part of the year, typically during breeding (Irwin & Irwin 2005).  The names of the thrush subspecies groups describe their differential migratory orientation: the coastal thrushes migrate on the west side of the Rocky Mountains, hugging the West coast as they travel south, whereas the inland thrushes travel east of the Rocky Mountains before reaching their wintering grounds in central and South America (Figure 2; Delmore & Irwin 2012). Previous work in the Delmore lab found that coastal and inland groups are genetically divergent in a region of chromosome 4 that is under selection and strongly related to migratory orientation (Delmore et al. 2016).

The coastal and inland thrushes also form a hybrid zone where their breeding ranges overlap in British Columbia. Since hybrids receive genes from both parental species, we might expect them to have higher levels of heterozygosity in their genome. In addition to a recombinant genome, hybrids in migratory divides often exhibitintermediate migratory routes that are likely inferior to parental routes, as hybrids migrate through less suitable habitat (Irwin & Irwin 2005). In the case of the Swainson’s thrushes, hybrids take an intermediate route, flying directly over the Rocky Mountains (Figure 2; Delmore & Irwin 2014)!  Ecological niche models have found that this route has lower habitat suitability for stopover sites during migration (Justen et al., in review). Use of intermediate routes compared to parental routes likely reduces hybrid survival (Irwin & Irwin 2005). If there is selection against hybrids, such as reduction in hybrid survival, reproductive isolation between subspecies groups will be stronger.

My project supported by the AGA EECG will test this hypothesis of selection against hybrids in a migratory divide. We will catch 1200 birds across 3 age classes (i.e., juveniles, first-year adults, and older adults) and I will use a genome-wide analysis to identify loci that are under viability selection. Under viability selection, or reduction of hybrid fitness, we would predict that younger age classes would exhibit greater heterozygosity than older age classes, as hybrids will have reduced survival compared to that of individuals of either parental group. We will also be able to identify which loci under viability selection are associated with migratory orientation to further elucidate specific genes controlling migratory behavior. Furthering our understanding of the genetic controls of migration will have important implications for understanding how migratory birds will respond and adapt in a changing world. Abby is a post-doc currently working in the Delmore lab at Texas A&M University on the consequences of seasonal migration on population divergence.

orientation: a primer for recent and future work. Frontiers in Behavioral Neuroscience, 2016. 10: p.

costs for hybrids in a migratory divide. In review.