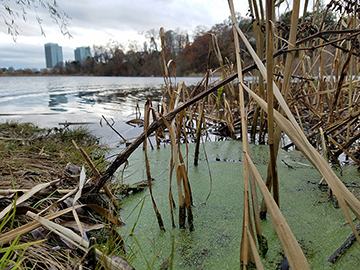 Humans are globally redistributing salt.  Soils (Rengasamy 2006) and freshwater (Dugan et al. 2017) are becoming saltier, while the ocean is experiencing fresh and salty anomolies (European Space Agency 2019). In North America and other temperate zones, salt is commonly used to deice roadways and sidewalks. This makes life much safer for people, but when the snow melts, where does that salt go?

In the Greater Toronto Area, we’ve used salt so much that it’s gotten into the groundwater, which means even summer stream conditions can exceed safe salt thresholds, and in winter, streams and ponds can be as salty as the ocean (Dunn 2018).  All this salt can be disastrous for freshwater organisms. Increased concentrations of sodium and chloride ions can disrupt osmotic balances, harming or killing individuals (Cañedo-Argüellas et al. 2019).

Duckweed (Lemna minor) is a tiny, floating, freshwater plant that reproduces vegetatively via clonal daughter fronds (leaf-like structures). While duckweed is native to ponds and backwaters of North America, it also thrives in urban and suburban ponds, including sites that are regularly exposed to salt.

How does duckweed manage this? We might expect that adaptive changes to DNA sequences would underlie salt tolerance in urban populations of duckweed. However, work by our colleagues shows that duckweed harbors little segregating genetic variation either within or among populations, and undergoes sexual reproduction only rarely (Ho 2017). Further, we found that both urban and rural populations are initially sensitive to salt, but daughter fronds are resistant (O’Brien et al. 2019) – suggesting within- or trans-generational plasticity.

One potential mechanism of plastic stress tolerance in plants consists of induced epigenetic marks, including methylation of DNA cytosines in and around genes. Methylation can alter transcription rates, and ultimately improve stress tolerance during subsequent stress (Boyko et al. 2010). Plants generally reset acquired marks only between sexual generations, so clonal plants may accumulate them (Wilschut et al. 2016), and they could thus underlie duckweed’s unusual  salt response. In fact, we’ve found that a methylation blocker, zebularine, amplifies the effects of salt on duckweed.

An ongoing experiment tests whether acquired salt tolerance in duckweeds is maintained in the absence of continuing salt stress (e.g., between snowmelt events in the field). We will use methylation sequencing of salt-exposed duckweeds, duckweeds that have not been exposed to salt in years, and duckweeds that have experienced only a few weeks since salt-exposure. With this #EECG2020 Award, we hope to identify differentially methylated regions that may be involved in methylation-dependent salt tolerance.

Going further, duckweed may be primed with extra plasticity to tolerate stressful conditions beyond salt, and is resilient to other pervasive organic and inorganic contaminants: tire wear particles from roads (forthcoming), an anti-corrosive (O’Brien et al. 2019), and zinc (O’Brien et al. 2020). However, in each of these other cases, the microbiome of duckweed also plays a role, in some cases ameliorating (but in others exacerbating) stress. We therefore plan to compare the contribution of methylation and the duckweed’s own microbiome to salt tolerance.

Anna O’Brien is a Post-doctoral fellow at the University of Toronto in Ecology and Evolutionary Biology (EEB). Anna works in the labs of Profs Megan Frederickson (EEB), Chelsea Rochman (EEB), and David Sinton (Mechanical Engineering), and collaborates with the lab of Prof. Stephen Wright (EEB).  Anna’s interests encompass species interactions broadly, but she mostly works on plant-microbe associations. Aspects of abiotic environments can shift costs and benefits of these interactions for both parties, and Anna’s post- doctoral work has shown that the novel anthropogenic contaminants may often disrupt plant-microbiome interactions.

Ho, K. H. E. June 2018. The Effects of Asexuality and Selfing on Genetic Diversity, the Efficacy of Selection and Species Persistence(Doctoral dissertation, University of Toronto, Toronto, Canada). Retrieved from http://hdl.handle.net/1807/89664

Boyko, A., Blevins, T., Yao, Y., Golubov, A., Bilichak, A., Ilnytskyy, Y.,  and others. 2010. Transgenerational adaptation of Arabidopsisto stress requires DNA methylation and the function of Dicer-like proteins. PloS one, 5:e9514.