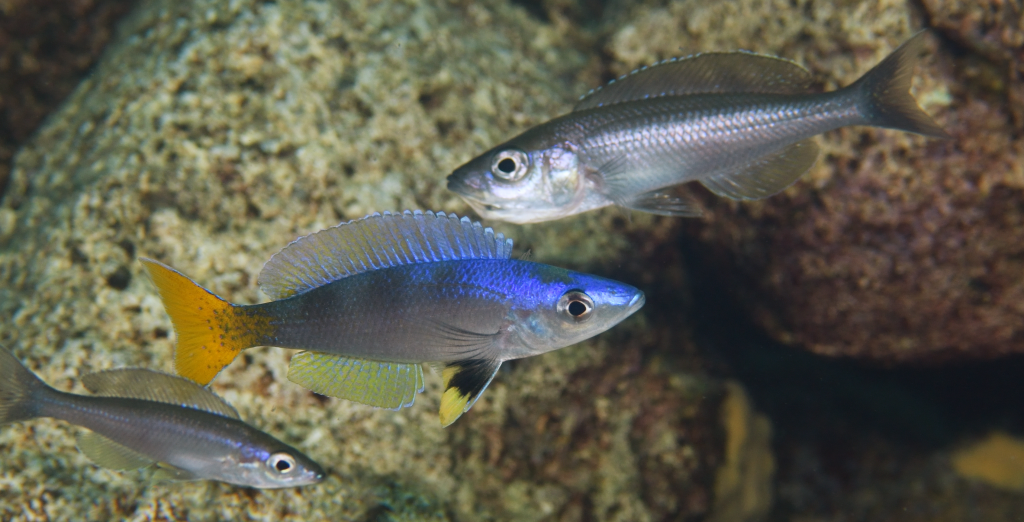 A trio of Cyprichromis leptosoma, a cichlid fish from Lake Tanganyika, East Africa. Cichlid fish show unexpected diversity of sex chromosomes within and among species. This species has a novel ZW sex determination system on linkage group 5, one of three new sex chromosome systems reported in Gammerdinger et al. 2018. Photo by Ad Konings.

Sex chromosomes are special chromosomes where the gene that determines the sex of an organism resides. Most male humans have an X-chromosome and a much smaller and degraded Y-chromosome, while most females have a pair of X-chromosomes. All human Y-chromosomes share a common male ancestor, whom some call Y-chromosome Adam*, a reference to biblical Adam. If you were to go deeper into the lineage of the Y-chromosome you would find that, with the exception of a few distantly related mammals like the platypus** and a handful of rodent species that appear to have lost the Y-chromosome entirely, all male mammals share a common Y-chromosome that dates back ~181 million years (Cortez et al. 2014). For reference, the supercontinent that contained all of today’s land masses, Pangea, was beginning to break apart during this time and the reign of dinosaurs had recently begun.

Most of the early work on sex chromosomes was done by visual inspections of chromosomes under microscopes. Researchers would simply look at the chromosomes of an organism and see if any of the pairs of chromosomes were different in size. If they found this size dimorphism following a proper sex-specific pattern, then they would report sex chromosomes for that species. For mammals, this was quite simple because the Y-chromosome is much smaller than the X-chromosome, and for most birds (excluding the ratites such as emus, ostriches and kiwis), the W-chromosome is much smaller than the Z-chromosome. However, there are many species, particularly in fishes and geckos, that determine their sex through the use of genetic mechanisms—but there is not any clear size dimorphism amongst their chromosomes when researchers look at them underneath a microscope.

Today, through the use of new genome-sequencing technologies, researchers have been able to finally detect very young and less differentiated sex chromosomes in many fishes and geckos. These young sex chromosomes do not have the size dimorphism witnessed in birds and mammals, and can only be seen by comparing the genomes of males and females to find small differences in their DNA. And, while most mammals share a single common XX-XY system and birds share a different ZZ-ZW system, some fish and gecko clades have several sex chromosome systems. African cichlid fishes have well over a dozen systems (Gammerdinger & Kocher 2018; Gammerdinger et al. 2018). And in geckos, there appears to have been between 17 and 25 transitions among different sex chromosome systems (Gamble et al. 2015). Sometimes different species of the same genus can have different systems. One genus of ricefishes has at least seven different sex chromosome systems (Takehana et al. 2007; 2008; Nagai et al. 2008).

A given species can even have multiple sex chromosome systems. For example, one species of tilapia, Oreochromis aureus, has two systems acting simultaneously: a ZZ-ZW system, which is unrelated to the avian ZZ-ZW system, and an XX-XY system, which is unrelated to the mammalian XX-XY system. In this tilapia, if an individual has a W-chromosome, it is always female, but if it has two Z-chromosomes, then its sex depends on the XX-XY sex chromosome system. If the individual with two Z-chromosomes has a Y-chromosome, then it is a male. However, if this individual with two Z-chromosomes also has two X-chromosomes, then in some cases it will be a male and in other cases it will be a female, suggesting an unknown, tertiary system that determines sex in these fish (Lee et al. 2004).

Why we witness this wide diversity of sex chromosomes within some fishes and geckos, which is absent from mammals and birds, remains unclear. Some researchers have hypothesized that alleles that are beneficial in one sex but detrimental in the opposite sex, a selection regime known as sexually antagonistic selection, could play an important role in creating new sex chromosomes. Other researchers have proposed that the decay of sex chromosomes that ultimately leads to the short Y-chromosome witnessed in mammals can have strong deleterious effects and this degradation gives a new sex chromosome system the opportunity to invade an older one. Still other researchers, including myself, argue that it is likely a combination of these reasons, along with other factors, that leads to this disparity in diversity.

However, even these selection mechanisms seem insufficient to explain the diversity we observe in vertebrate sex chromosomes. Do fish and geckos really have substantially higher levels of sexual antagonism than mammals and birds? It is hard to quantify sexual antagonism, so it is difficult to evaluate the creditability of this hypothesis. If the early decay of chromosomes has such deleterious effects, how could some clades, such as mammals and birds, have endured it? This dichotomy between the conserved sex chromosome systems witnessed in mammals and birds and the diversity of sex chromosome systems witnessed in many fishes and geckos is a place of personal intrigue for me.

Moving forward, studying the early stages of sex chromosome evolution will likely be a fruitful area for understanding the selection pressures that promote or impede the turnover of sex chromosome systems and could help elucidate this dichotomy.

* Interestingly, the individual who is Y-chromosome Adam changes and always moves forward in time. Consider a scenario where there are three different versions of the Y-chromosome: Two of them are closely related to each other and distantly related to the third. If the distantly related version ceases to exist in the population, then the most recent common ancestor of all living Y-chromosomes now does not need to include this distant and extinct lineage, but rather only the two closely related versions. As such, the most recent common ancestor of the extant versions of Y-chromosome is a new male, more recent in time. Will Gammerdinger is an ISTPlus Post-doctoral Fellow in the Vicoso Group at the Institute of Science and Technology – Austria. He studies the evolution of sex chromosomes, as well as the impacts of whole genome duplication events. In 2015, he won an Evolutionary, Ecological and Conservation Genomics Research Award from the American Genetics Association, which supported his work and the resulting publication from this funding, Novel Sex Chromosomes in 3 Cichlid Fishes from Lake Tanganyika, was awarded the 2019 AGA Stephen J. O’Brien Award. Will received his Ph.D. from the University of Maryland – College Park under the supervision of Dr. Thomas Kocher. He hopes to pass on his enthusiasm for genetics by one day becoming a professor.