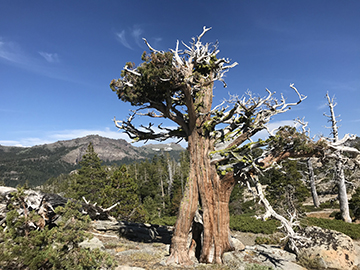 Hybrid zones elucidate the barriers to interspecific reproduction, the raw material for speciation, and thus are unparalleled resources for evolutionary biologists (Harrison 1993). However, when hybrid zones appear to lack reproductive barriers to gene flow, they pose a different set of questions, for example, what are the historical and contemporary factors which facilitate gene flow among these species, and what are the ecological and evolutionary consequences of introgressive hybridization? How do species remain distinct despite persistent gene flow over thousands of years, and what can this teach us about speciation?

Nested in the eastern foothills of the Sierra Nevada mountain range, the University of Nevada Reno is an ideal location to study natural hybridization. The dramatic ecotone generated by the large change in elevation from mountain to basin may provide the right conditions for hybridization and the formation of hybrid zones, especially among species which are experiencing secondary contact in the Holocene (Remington 1968). As a graduate student at UNR, I study three juniper species which hybridize throughout eastern Nevada. I use genomic approaches to resolve patterns of gene flow across the zone, which extends from the border of California and Nevada to central Nevada. We obtained data for approximately 9,000 genetic variants (SNPs) across 300 juniper individuals from 25 populations and used this data to better understand the evolutionary, demographic, and contemporary factors shaping genetic variation across the hybrid landscape.

The three juniper species diverged approximately 18 million years ago (Mao et al. 2010) and have likely been in contact for the last 12,000 years, during the interglacial period of the Holocene, as temperatures have warmed and stabilized. With our data, we were able to resolve gene flow among all three species resulting in tri-species hybrids. Genetic variation in the hybrid zone is dominated by geographic distance, yet some genetic variation appears to be partitioned according to environmental variables like precipitation and temperature. We found that genetic variation in pure Sierra, Utah, and western junipers is responding to environmental variables related to water availability (think snow melt and precipitation), but different genetic variants and water-related variables are involved in each species. For example, genetic variants in Sierra juniper, which grow on the eastern slopes of some of the highest mountains in the contiguous United States, are responding to increasingly mesic conditions, whereas genetic variants in western juniper, found in the high deserts of eastern Washington and Oregon, are responding to increased spring water availability. Interestingly, we found different patterns in hybrid populations, which possessed their own set of genetic variants which responded most strongly to higher winter and overall temperatures.

The results of this research suggest that while much genetic variation in the hybrid zone is shaped by geographic distance to pure populations of western, Sierra, and Utah juniper, a small but significant proportion of genetic variation is structured in response to environmental variation across the landscape. Understanding local adaptation within the context of hybridization is important for predicting how future climate change, which itself may facilitate gene flow among previously isolated populations, may affect adaptation and persistence of natural populations.

Junipers are a foundational plant of the Great Basin, providing habitat and food resources for numerous arthropod and animal species (Poddar and Lederer 1982, Adams 2014). It is truly a remarkable system for understanding the maintenance of species boundaries and the extended ecological consequences of hybridization. Future work in this system aims to understand how genetic variation and diversity scales upwards to shape leaf chemical variation across the hybrid zone with the potential to affect community and ecosystem processes. Katie Uckele is a Ph.D candidate working in Dr. Thomas Parchman’s lab at the University of Nevada Reno, where she is currently investigating the influence of hybridization on landscape genetic structure and phylogenetic relationships in western North American junipers. She was awarded the EECG in 2018 for her work on tilizing a recombinant hybrid zone to elucidate links among genotypic, environmental, and phenotypic variation.