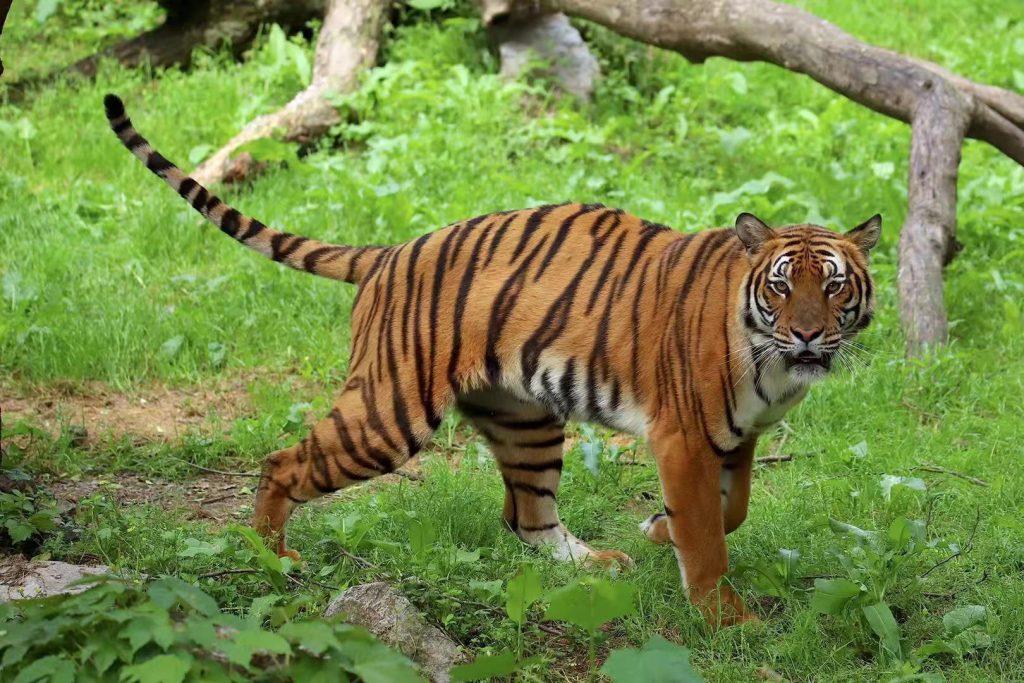 In the provinces of South China, there once roamed a unique subspecies of tiger. The South China tiger (Panthera tigris amoyensis) is ecologically, morphologically, and genetically different from other tigers.

But, unfortunately, you will no longer find one of these tigers in the wild. All that remain are in captivity. The South China tiger is listed as “Critically Endangered (Possibly Extinct in the Wild)” in the IUCN Red List of Threatened Species.

Habitat loss and human-tiger conflict have led to the collapse of the wild population. They haven’t been seen in the wild in over three decades.

Zhang, Xu, and colleagues (2019) from the Chengdu Research Base of Giant Panda Breeding, Peking University, and nearly all zoos in China maintaining the last surviving South China tigers, looked at the largest sample of captive tigers to date. They looked at both mitochondrial DNA (4687-bp) and microsatellites (30) of 87 captive South China tigers from 14 zoos or breeding centers. That is 75% of the total population!

Their goal was to determine if there is potential for using the captive population to reintroduce the South China tiger to the wild.

Genetic ancestry is a way of looking at an individual’s past by how they share genes with others in the population. To identify the ancestry of the captive South China tiger, Zhang et al. applied a system that uses genetics of captive tigers worldwide, called verified subspecies ancestry (VSA; Luo et al. 2008, 2010a, 2010b).

The Chinese Association of Zoological Gardens has been keeping track of all the South China tigers in captivity in a studbook. Studbooks are used by zoos to follow family histories over generations.

Like 23andMe for tigers, each tiger’s genetic ancestry was found and then matched with its family history from the studbook to make a pedigree that shows all the relationships within the captive population (Figure 1) and how these captive tigers are related to other subspecies.

From 1955 to 1970, South China tigers from Fujian and Guizhou were brought into the Chongqing and Suzhou Zoos. Now, the 144 living South China tigers are descendants of six wild founders (two males and four females) from those two zoos. These two lines of tigers were maintained until 1995 when the zoos started breeding them to increase genetic diversity and decrease inbreeding depression.

Seventy-four of the sampled tigers fell into these two lines. The remaining 18 tigers descended from the Suzhou line but had various degrees of admixture, or genetic evidence of other subspecies.

However, taking those 18 tigers out of the population, the remaining South China tigers show levels of genetic variability like species with proven successful captive conservation programs (Luo et al. 2008).

The captive South China tiger population has the potential for population growth and, with well-coordinated genetic management, eventual reintroduction to the wild.

Principal investigator Dr. Shu-Jin Luo says that “this study has provided a full picture of the genetic status of the captive South China tiger population and sheds new light on the possible candidates to use, should reintroduction into their original range come into reality.” Caitlin Curry is a Postdoctoral Scientist in the Conservation Genetics Lab at Omaha’s Henry Doorly Zoo & Aquarium doing research on lemur biodiversity in Madagascar. She studied conservation and population genetics in the Interdisciplinary Program of Genetics at Texas A&M University where her dissertation research focused on biodiversity of the African lion over time using ancient DNA from historical lions found in museum collections to explore how genetic diversity has changed in lions over the past century. You can learn more about her work on her website.