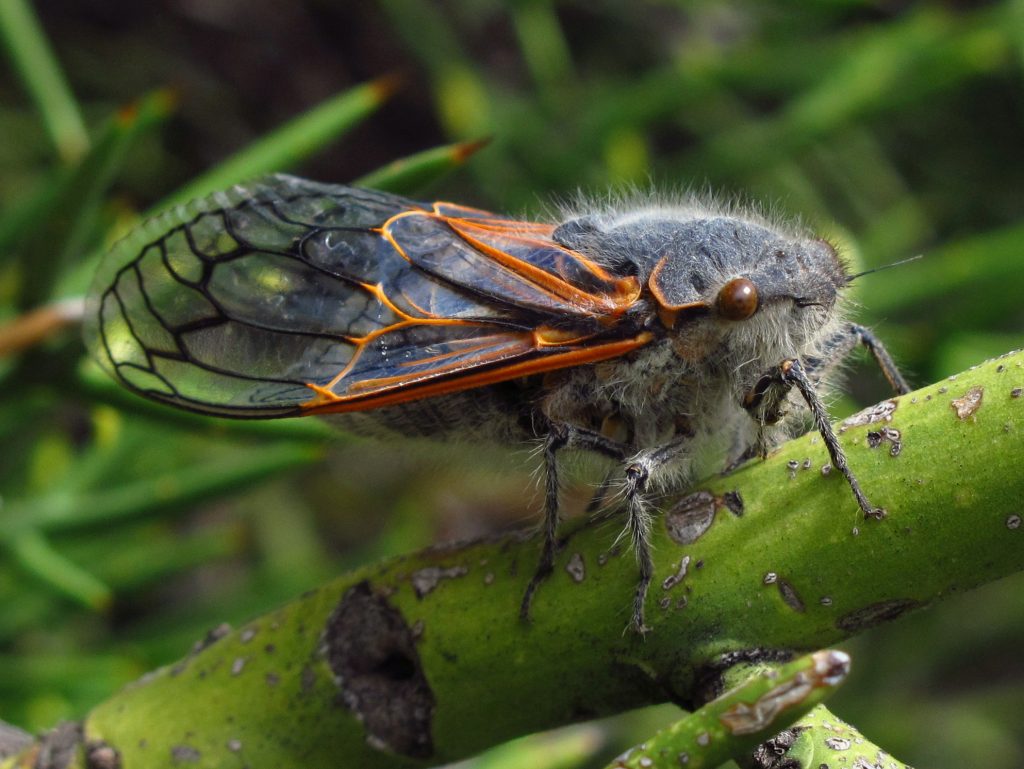 Listen to the audio story:

“One of the most interesting, pleasant places where I collected cicadas in Chile was this little hot spring resort town high up in the Andes. It was full of cicadas. They were so abundant, just landing on us—that was lots of fun,” says Dr. Piotr Łukasik. “[The sound of cicadas] definitely brings back the summer. Yes, I must say that I really like cicada songs.”

“My name is Piotr Łukasik. I am a researcher at the Swedish Museum of Natural History in Stockholm, Sweden, and an incoming assistant professor at Jagiellonian University in Kraków, Poland.”

Piotr studies insects and their symbionts, the specialized microorganisms that live inside their insect hosts’ bodies and perform processes that the insects couldn’t otherwise do. Originally from Poland, he got his master’s degree at Jagiellonian University in Poland and his PhD at the University of Oxford in the England, where he studied the diversity and ecology of facultative symbiotic bacteria of aphids.

In 2014, he joined the laboratory of Dr. John McCutcheon at the University of Montana, where he spent the next four years conducting research on cicadas.

“I really wanted to be able to go deeper to understand those more intimate aspects of relationships among insects and their symbiotic bacteria,” Piotr says.

In March of 2019, Piotr and his collaborators published a new study in the Journal of Heredity. Piotr received an Ecological, Evolutionary, and Conservation Genomics award from the American Genetic Association to help fund his research. The study was an analysis of 107 mitochondrial genomes of cicadas.

All those cicadas look a bit different.

“They often have really spectacular coloration, often very intricate patterns. Some cicadas are quite hairy,” Piotr says. “It is really hard to say what a cicada looks like.”

Even if you’ve never seen a cicada before, you’ve probably heard them, or at least heard of them. Just about every year in the eastern United States, cicadas emerge in droves, coating trees and filling the air with their creaking, ear-splitting songs. Those are the periodical cicadas, which emerge as a group all at once.

But cicadas live on every continent except Antarctica, and they can sound like everything from a fire engine to squeaky machinery.

Unlike periodical cicadas, most cicadas don’t emerge all as one giant group. But their behavior is otherwise much the same.

“They produce lots of noise, they mate, they lay their eggs, and then they die. Several weeks later, the eggs hatch, and the nymphs drop to the ground, dig in, attach to plant roots, and spend between generally 2 to 17 years,” Piotr says.

“Cicadas rely on specialized symbiotic microorganisms that inhabit their tissues for the production of those essential amino acids and vitamins,” Piotr says.

Those specialized microorganisms that produce essential amino acids are the cicadas’ nutritional symbionts, which Piotr also studies. Piotr’s interest in the relationships between insects and their symbionts is part of what first drew him to his PhD research and then to his postdoc at the University of Montana and this new Journal of Heredity study.

The study, which was published in the March 2019 issue of the Journal of Heredity, presents mitochondrial genomes from 61 species of cicadas.

For the study, Piotr and his fellow researchers wanted to develop a phylogenetic framework for cicadas—a sort of map for understanding the relationships between different species of cicada.

They also wanted to understand the stability and organizational diversity of the cicada mitochondrial genome.

“We were interested in whether mitochondria of cicadas, just like their symbionts, may also evolve in unusual ways. So one of the goals of the project was to understand the stability and the organizational diversity of cicada mitochondrial genomes,” Piotr says.

In order to study the mitochondrial genome of 61 species of cicadas, Piotr needed to get his hands on a whole lot of cicadas. Many of the cicada specimens were contributed by researchers from around the world who also worked on the study. Other times, Piotr went out collecting cicadas himself.

“Altogether, I spent about three months over the course of three years traveling across Chile, but also parts of Argentina, collecting lots of cicada specimens,” Piotr says.

“Females are generally quiet, although they might click when they hear males and are attracted. But these are males that are singing, allowing the researcher to hopefully get close with the net and hopefully catch the singing male.”

When Piotr and his fellow researchers brought the cicadas back to the lab, they began studying the genetic makeup of cicadas and their symbionts. Cicada nuclear genomes are huge—twice the size of the human genome—and are very difficult to characterize. Because of this, they focused on mitochondrial genomes. They found that the cicada mitochondrial genomes were remarkably stable. The genomes had changed little since insects as we know them evolved.

But the genomes of the cicadas’ symbionts, those microorganisms that produce necessary amino acids for the cicadas, were different. Many of the symbionts’ genomes were in turmoil.

The symbionts first found their way into a common ancestor of a true bug clade that includes cicadas some 300 million years ago. It is likely that opportunistic bacteria infected the common ancestor, and that bacteria eventually stopped being pathogenic and became heritable, getting passed from mother to offspring. Along the way, the bacteria, now symbionts living entirely inside the cicadas, lost most of their starting set of genes.

“Over the course of their evolution, they lost probably not less than 95 percent of the starting set of genes, resulting in some of the smallest genomes known for any cellular organisms,” Piotr says.

One cicada symbiont is a bacterium called Hodgkinia.

“Hodgkinia became an obligate, heritable, nutrient-providing associate of cicadas. Its genome got reduced, losing probably some 97% of the ancestral set of genes,” Piotr says.

Hodgkinia is symbiotic with multiple species of cicadas. In some cicadas, the genomes of Hodgkinia have remained stable.

“In many cicadas, the Hodgkinia symbiont has undergone fragmentation, or essentially splitting into distinct lineages, each of which encodes only a small set of the ancestral, very compact set of genes. And it’s all apparently evolving really fast and kind of being really messy, to the point that it’s quite hard to say what exactly is going on,” Piotr says. “Those symbionts have really no precedence outside of cicadas.”

Because of all that fragmentation, genomes of Hodgkinia lineages get even more reduced, sometimes to about the same size as the genome of a single mitochondria and can encode even fewer genes.

It’s not entirely clear why this relationship works as it does. But having the phylogenetic framework created in this study is likely to be very helpful for understanding the relationship between insect hosts and their symbionts.

“The collection of mitochondrial genomes that we gathered provides the essential phylogenetic framework which allows us now to get a better understanding of the broader range of evolutionary forces acting upon hosts and their symbionts,” Piotr says.

“Thanks to the work present in this paper, we have also been able to see an actual difference in evolutionary rates among different cicada clades, which in at least some cases appear correlated with what happened to the nutritional symbionts.”

Piotr is moving on now. He finished his postdoc at the University of Montana in 2018, and he’ll soon be heading back to Jagiellonian University in Poland. He’ll be starting a research group there that will focus on describing the microbiomes of the same insect suborder that cicadas are a part of, but also looking at symbioses in a much broader range of insects. They will routinely sequence mitochondrial genes from large numbers of insect individuals and expect to be sequencing and characterizing thousands more of mitochondrial genomes. Mitochondrial genome research like the Journal of Heredity study will be critical in his upcoming project.

As it turns out, all this cicada and symbiont research doesn’t just have implications for insects. Hodgkinia’s genome is nearly as small as mitochondria. It is generally agreed that mitochondria themselves started out as symbionts some two billion years ago. So understanding how symbionts function and evolve within an organism can give us an idea of how mitochondria might have done the same.

“Looking at the symbionts allows us to understand some of the processes that have likely led toward the evolution of mitochondria, those critical organelles that inhabit all our cells and the cells of almost all eukaryotes,” Piotr says.”

Thank you to Piotr Łukasik for teaching me all about cicadas and their symbionts. Thanks also to Piotr’s fellow study authors Rebecca Chong, Katherine Nazario, Yu Matsuura, DeAnna Bublitz, Matthew Campbell, Mariah Meyer, James Van Leuven, Pablo Pessacq, Claudia Veloso, Chris Simon, and John McCutcheon for their fascinating work in this Journal of Heredity study. David Marshall and Piotr Łukasik supplied the cicada songs. You can hear more cicada songs on David Marshall’s website, www.insectsingers.com. This story was produced by me, Chantal Cough-Schulze, for the Journal of Heredity and the American Genetic Association.

You can read the Piotr Łukasik et al.’s cicada mitochondrial genome study in Volume 110, Issue 2 of the Journal of Heredity.