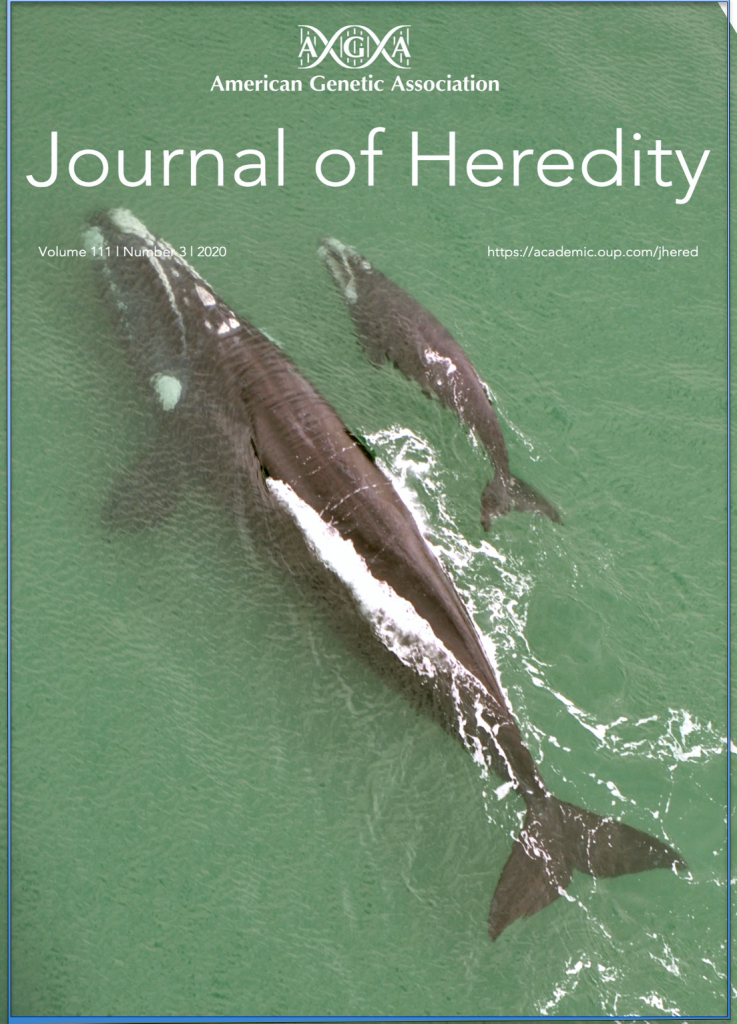 Right whales were given their name because they were the rightwhales to hunt: they swim slowly near the ocean’s surface and make predictable annual migrations to easily accessible bays along the coast. They were hunted to near extinction before international protections were enacted in 1935.

As the species recovered, researchers have acquired a myriad of information from genetic samples, photo identification and tracking, visual and acoustic observations, and historic whaling records. A recent study pieced together this information to characterize right whale population structure and connectivity in the South Atlantic.

Right whales migrate from sheltered calving grounds in winter to offshore feeding grounds in the summer. They cross international borders and typically remain consistent in their migration pathways over decades. To effectively study this wide-ranging and long-lived organism, researchers have established an impressive international collaboration that has allowed for sampling and coordination across political boundaries.

Samples were acquired through an assortment of methods: during the necropsy of a stranded carcass, the collection of sloughed skin, access to archived skin samples, and even by using a “steel biopsy dart deployed from a modern veterinary capture rifle or from a crossbow” (Carroll et al. 2020).

I recently had the opportunity to speak with Dr. Scott Baker, a co-author on the study and the researcher who initiated the genetic study of right whales in the 1990s.

How much do we know about the historic distribution and abundance of southern right whales?

We know less about southern right whales compared to other species, like humpbacks, because they weren’t subject to modern commercial whaling, which did have some science behind it.

However, they were whaled in the 19thcentury, and there are some informative records from this time. Historic whalers knew the seasonality and the concentration of the populations they hunted. They left records of a number of whaling grounds. If you look back at records, the southern right whales were historically present in some places that they are not any longer, such as Chile.

Four circumpolar nursery populations have shown recovery since protections were enacted: Argentina (and the connected population, Brazil), South Africa, Australia, and New Zealand. The IUCN no longer considers southern right whales as threatened, they are classified as least concern on the Red List.

Are right whales facing any current or potential future threats?

There is anxiety that the oceans have a tipping point in regards to climate change and ocean acidification. However, in some ways, the whales are actually benefitting. Habitat is opening up for humpback whales in the southern hemisphere, and maybe right whales as well.

In regards to their morphological condition, southern right whales are in good shape compared to their northern counterparts. Direct threats are more common in the Northern Hemisphere, where we can see damage from entanglement in fishery gear and ship strikes. The Southern Hemisphere really is blessed as more of a sanctuary for right whales.

I was fascinated by the description of obtaining genetic samples! What is it like to obtain samples for your study species? Are whales difficult to find?

When I first started studying them, whales were quite difficult to find. They had been nearly driven to extinction, so they were less numerous and we were less familiar with their distribution. During my post-doc, there had not been a report of a right whale sighting for 50 years.

We’ve gotten better at finding them, their populations have increased, and the methodology improved. As a postdoc, I was trained in molecular ecology and PCR. This technology, and the ability to access the genome, revolutionized what we could do with the study of whales.

The methods that you read for skin biopsy sampling are relatively new. The idea of sampling a living whale was a novelty when it was introduced, both to scientists and for permitting purposes. The permitting was as much of an obstacle as the monitoring! What you see in the paper, our ability to track and sample these animals, is the culmination of over 20 years of sampling, testing new methods, archiving, and keeping really good records.

How accessible are your sampling sites, and how well-characterized were they before this study?

We had genetic samples from some of these sites before, with some degree of analysis and comparison, but this was the most well-coordinated effort.

We did acquire a new sample from Chile, and some from the feeding grounds in South Georgia.

These were exciting to obtain because feeding grounds are difficult to find- whales have a lot of ocean to choose from. We’ve accessed South Georgia in particular because there are a lot of records of whaling in this region.

Our South Georgia site is very remote, and travelling there is quite an adventure. We fly to the southern tip of Chile, then on to Stanley in the Falkland Islands. It’s a four day steam from there to South Georgia. The British Antarctic Survey has a research station with a small, isolated community of 36 people.

Can you recognize individual whales?

Yes, definitely. Photoidentification of whales is still a powerful tool. It doesn’t give the full suite of information as genetic sampling, but repeated sightings of the same individual have traditionally been the primary tool for tracking individuals, and we still use this tool.

Calves go through what we call a “white phase”. They appear as albinos. As they grow up, they become mottled, and you see a sort of leopard print. These patterns help us to identify individuals. These whales also have patches of rough, thickened skin, called callosities, that can become infected with sea lice. The callosities form distinct patterns that can help us identify individuals. You can see these rough white patches on the whale in the cover photo.

Which of your results were the most exciting? What was the most surprising?

The evidence for philopatry, where offspring have the same migration patterns as their mothers, is interesting. In my view, this learned behavior is cultural. The evidence suggests that this piece of whale culture is shaping the population structure.

We only had one sample from Chile but it’s amazing how informative it is. Ten years ago, we thought the Chilean population was extinct. But now there are some photo ID’s, and we know there are a handful that survived. This is one of them. In the absence of genetics, we would have thought it was a vagrant, or we would be arguing about whether it was a remnant survivor of the population, or a re-colonizer from another population, because both scenarios can occur. For example, in New Zealand, the sub-Antarctic population is recovering, but we also see other examples where extirpated populations are recolonized by other populations. Without genetics, it would all be speculation. However, the genetics are conclusive- this whale is clearly admixed, not solely belonging to one population or the other.

This study gives us a better picture of the structure and connectivity of southern right whale populations, which seems to have important management and conservation implications. Are you involved in the process of communicating these to policymakers and stakeholders, and what does the process look like?

Whales are a good way to reach out to people about the ocean. People are interested in them not only because of their unique biological characteristics and life history, but because of whaling. Our species have a long history together (which hasn’t always been good for one of the species, the whales!)

In regards to policy, we take most of this work to the International Whaling Commission. It’s a ten-day meeting with about 160 scientists and 88 member nations. Few of the member nations are whaling, but they are all interested in resource management and the state of the ocean.

Our work has helped this group to understand the recovery of populations and the importance of migration fidelity and whale culture.

What does the future hold for this research?

We need to gain a better understanding of the feeding grounds. When whales leave coastal nursery grounds, where are they going? What cues drive consistent migration among whales across decades of their lifespans and across generations, and what threats and predators do they face?

As we focus on individual whales over time- and these studies will go on after I’m retired and probably, well hopefully, after I’m gone- we’ll be able to unpack some of what sustains these populations over long time scales and the cognitive process that drives these dynamics. They must have maps in their mind of where they’re going.

I’d like to see work into the potential to use ecological markers- stable isotopes, lipid analyses- and epigenetics to characterize populations. I think we’ll see great improvements in tagging methodologies as well, some sort of satellite transmitters. For now, these are expensive and difficult to implement, but there’s great potential for the development and improvement of these technologies.

The global collaboration involved in this research is unusual, if you look at how many scientists work, but we’ve got to be able to build and sustain these broad networks at a scale beyond that of a single researcher, and not only a single researcher, but also their lifespan. Right whales live 60-70 years. Bowhead whales are the longest-lived marine mammal, and may live 150, maybe even 200 years. They’re living longer than the average scientist’s career. Sarah Shainker (@SarahShainker) completed a B.S. in Marine Biology at the College of Charleston before serving as a Peace Corps volunteer in the Philippines, where she developed interests in environmental education and communicating science to conservation and management stakeholders. Sarah is currently a first-year Phd student in Stacy Krueger Hadfield’s lab at the University of Alabama at Birmingham. She plans to integrate population genetics and a citizen science monitoring network to develop eco-evolutionary studies of freshwater macroalgae in the southeast United States. She was recently awarded the NSF GRFP and UAB’s Blazer Fellowship.