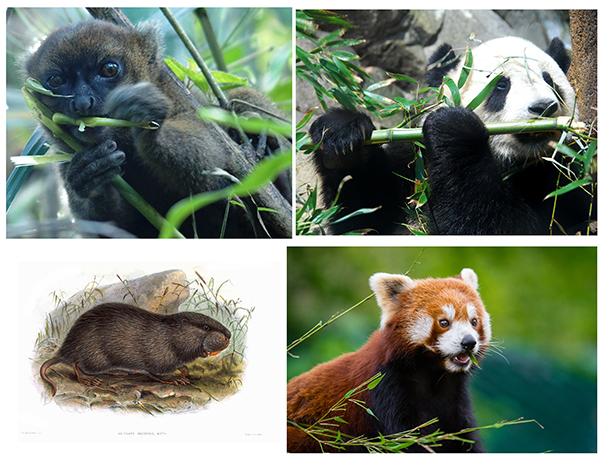 Cyanide is deadly – to most things. In high enough doses it blocks the body’s ability to create energy by interrupting cellular respiration. But even at non-lethal doses it has knock-on effects throughout the body. Despite this, a few mammals eat it regularly.

In my last post, I described how I found multiple ways in which bamboo lemurs have adapted to survive cyanide in their bamboo diet. They have adaptations across at least four metabolic pathways: cellular respiration, detoxification, thyroid function, and taste. But a few other mammals have adapted to cyanide too: Giant pandas (Huang et al. 2016), and possibly red pandas, South Asian bamboo rats, and South American bamboo rats as well.

Cyanide is so dangerous because it acts at a fundamental metabolic level – no animal can get around the need for cellular respiration. This means it’s hard to adapt to, as we can see by the small number of mammals that have managed.

It also means that there may only be a limited number of ways in which it’s even possible for a mammal to adapt to it. So this small group of cyanide-adapted mammals provides a good system with which to explore the idea of concerted convergence, in which unrelated species converge on joint adaptations in a certain set of otherwise unconnected biological systems (Patterson and Givnish 2002).

The hypothesis here is that, in some cases (such as cyanide adaptation), only a certain combination of changes can result in adaptation. To illustrate, imagine you want to bake chocolate chip cookies. You need flour, sugar, eggs, butter, and, of course, chocolate chips. You can play with the varieties a little bit (brown sugar, white sugar, both?), but without one or more of those essential ingredients, whatever comes out of your oven won’t be chocolate chip cookies. Contrast this with making chili: Beans or no beans? Ground beef, turkey, sausage, or no meat at all? Spicy or not spicy? Unlike chocolate chip cookies, you don’t need to be too picky. Whatever you decide (within certain broad choices), it’s still chili.

As a biological counter-example, take flight. Birds and bats have both evolved wings, but both also have many other adaptations for flight. Birds have hollow bones to reduce weight, and specialized lungs with one-way airflow to extract more oxygen. In contrast, bats have fused some bones to reduce weight. And instead of specialized lungs, they have large lung volumes and faster breathing rates while flying. There are thus multiple ways to adapt to flying, concerted convergence wasn’t necessary.

So, is there more than one way to adapt to a high cyanide diet? I’ve already shown that bamboo lemurs have multiple adaptations across unrelated biological systems. To find out if other cyanide-adapted mammals share these, I sequenced and analyzed the same genes I had tested in bamboo lemurs, this time in giant panda, red panda, South American bamboo rats, and Asian bamboo rats, and their relatives that aren’t adapted to cyanide.

Once I knew which genes are under selection in these additional species, I developed a test to determine if these species share adapted pathways (those pathways with one or more genes under selection) with each other more often than expected by chance. If they do, that is evidence of concerted convergence.

First, I found evidence of positive selection in all of these new species – the first evidence of cyanide adaptation in mammals besides bamboo lemurs and the giant panda. Selection occurred not only on genes in the same pathways, but in some cases on the same individual genes.

And when I tested for concerted convergence, I found that both groups of bamboo rats have converged with bamboo lemurs on a set of joint adaptations in cellular respiration, detoxification, thyroid function, and taste. Giant pandas share adaptations in only three of these pathways, cellular respiration, detoxification, and taste.

You’ll notice that the giant panda shares only three out of four adapted pathways. You may remember from my last post that thiocyanate inhibits thyroid function. Despite being known to detoxify cyanide to thiocyanate in large amounts (Huang et al. 2016), the giant panda has no evidence of thyroid adaptation! The symptoms of thiocyanate toxicity are, in part, very similar to those of hypothyroidism, and include slow metabolism and lethargy. If you think that sounds like a normal panda, you’re not alone. In 2012, Antoni Milewski and Ellen Dierenfeld proposed that thiocyanate toxicity may be a major cause of slow reproduction in captive giant pandas.

As for the red panda, this species has the fewest genes under selection in these pathways. It is likely that they eat less cyanide than the other species. They prefer to eat bamboo leaves, while bamboo lemurs, giant pandas, and bamboo rats prefer shoots. Since bamboo uses cyanide to protect its most important tissues – growing shoots – the highest concentrations of cyanide are there.

Bodies are complex, and it might be expected that this complexity would provide many possibilities to adapt to certain conditions. But ultimately it seems that, for some conditions, adaptive possibilities are limited. Most cyanide adapted mammals have converged on one set of necessary adaptations – and when they don’t, there are negative fitness consequences. What we don’t yet know is how the function of the proteins these genes encode is changed in bamboo lemurs and these other cyanide-adapted – that’s the next step.