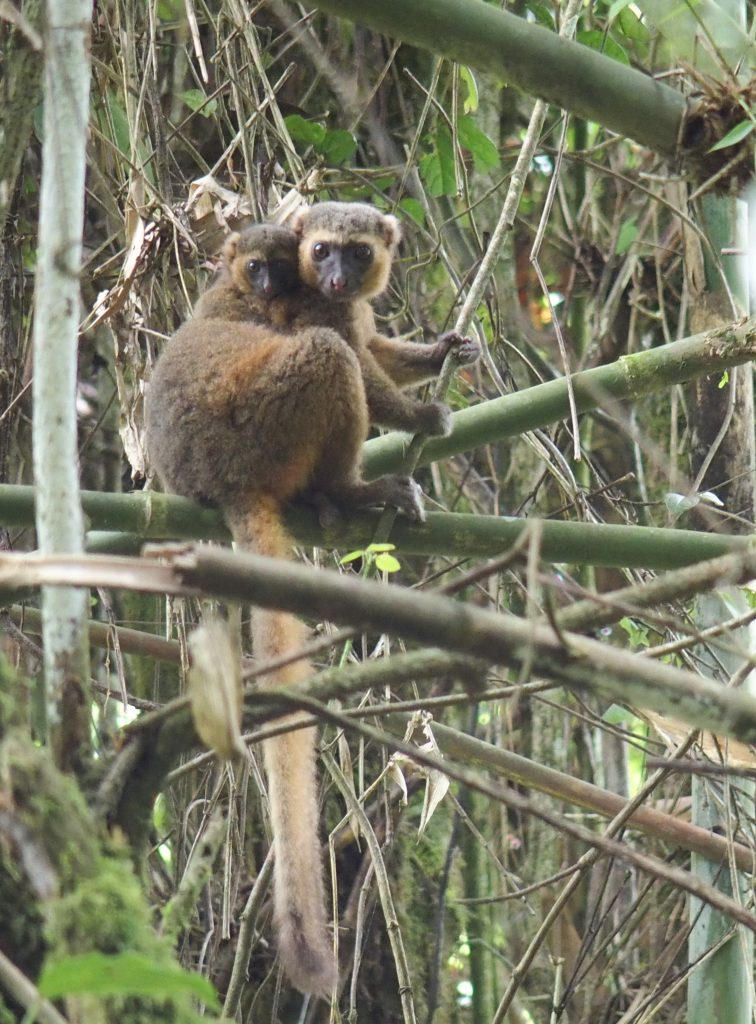 Eating is dangerous. Are you drinking a glass of wine? Perhaps planning pesto for dinner? The very flavors that attract us to those foods come from toxins plants produce to protect themselves. We humans know to the deadly ones. But imagine you’re a wild herbivore – every bite you take is a risk.

Bamboos, and many other plants (including almonds and lima beans) protect themselves with cyanide. This deadly toxin stops cellular respiration by obstructing cells’ oxygen use. With cyanide in the body, the body can’t make energy, and the animal dies.

Despite this, a few mammals make it their main diet. Most famous is the Giant Panda, but two bamboo lemurs, the Greater Bamboo Lemur (Prolemur simus) and the Golden Bamboo Lemur (Hapalemur aureus), daily eat bamboo with up to 50 times the lethal dose of cyanide for an animal their size. In other words, these cat-sized primates eat enough cyanide to kill an adult human.

Most mammals, including humans, can detoxify cyanide in small amounts. We have to, it shows up in almonds, apple seeds, and wood and cigarette smoke, among other places. We do this with enzymes that transfer a sulfur from the amino acid cysteine to a cyanide molecule, creating the metabolite thiocyanate. But this process is easily overwhelmed by too much cyanide.

For my dissertation, I set out to discover how bamboo lemurs, and other bamboo-specialized mammals, survive their deadly diet. First, I needed to figure out the general physiology. Cyanide and its metabolites are excreted in urine, and Yamashita et al. (2010) showed that this is also true for bamboo lemurs. So I collected their pee and then quantified the amounts of cyanide and its metabolites present, hypothesizing that large amounts of thiocyanate, the detoxification metabolite, would indicate vastly improved detoxification ability, while large amounts of unmetabolized cyanide would indicate that they are able to maintain cellular respiration in the presence of cyanide.

I worked in Ranomafana National Park, Madagascar, based out of the Centre ValBio research station. With the help of Malagasy PhD student Lydia Tongasoa and a number of research technicians, we collected the lemurs’ pee using funnels. We simply hung out with the lemurs from dawn to sunset, funnels at the ready, and waited for them to pee.

Once I knew the general physiology, I could look at specific genes involved in those pathways. I used targeted gene capture to sequence 60 genes in bamboo lemurs and 18 of their non-bamboo-eating relatives. I then compared and analyzed these sequences for evidence of positive selection to determine which specific genes are involved in cyanide adaptation.

What I found was surprising. The chemical analysis, carried out in the lab of forensic toxicologist Dr. Marta Concheiro-Guisan, showed that bamboo lemurs excrete large amounts of both detoxification metabolite thiocyanate and unmetabolized cyanide!

Because of this, I targeted genes from four pathways: detoxification, cellular respiration, thyroid function (in large amounts, thiocyanate impairs the thyroid), and taste (most herbivores avoid cyanide producing plants because it tastes bitter). With help from former undergraduate students Hassan Amin and Kaitlyn Malewicz, I found evidence of positive selection in genes from all four of these pathways. Positive selection on the cyanide bitter taste receptor occurred earlier in bamboo lemur evolution than did selection on detoxification and cellular respiration.

And positive selection on the cyanide bitter taste receptor occurred earlier in their evolution than on other genes, giving us a hypothesis for how these adaptations may have evolved in the first place: If they first evolved to recognize (formerly bitter-tasting) bamboo as food, they might have entered an evolutionary arms race with the bamboo – they adapt to a small amount of cyanide, the bamboo evolves to produce more cyanide to avoid getting eaten, the bamboo lemurs adapt to it, and so forth.

In addition, you might be wondering what about other bamboo specialized mammals? Giant pandas are known to have some kind of cyanide adaptation (Huang et al. 2016), and red pandas, South Asian bamboo rats, and South American bamboo rats may as well. So I also looked at genetic adaptations in these species to see if they shared a similar pattern of adaptation across the same pathways as bamboo lemurs – this would suggest a consistent set of adaptations necessary to become a dietary cyanide specialist.