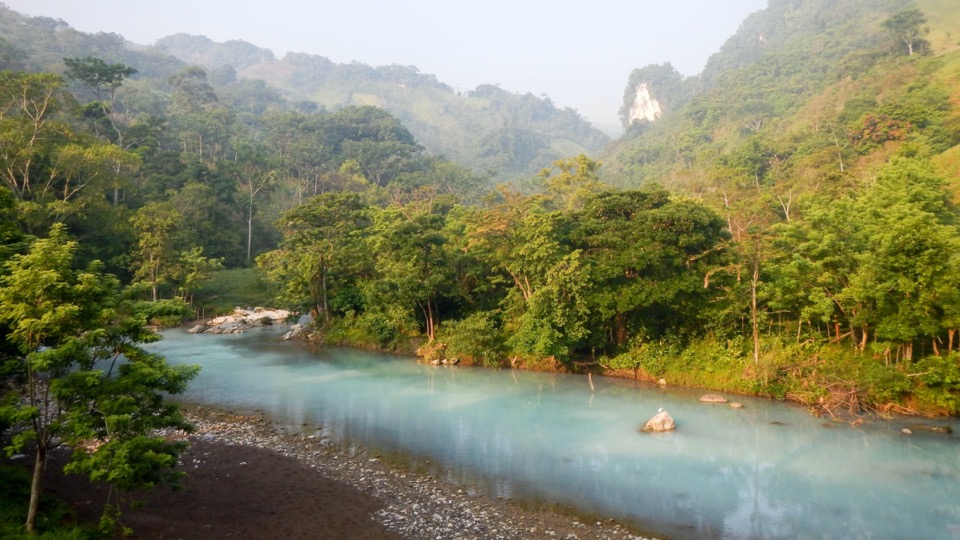 As you cross the steel bridge that hangs over the river, the lush, bright green foliage of the jungle and sounds of birds and howler monkeys surround you. The deeper you go, the faint sulfurous smell of rotten eggs hits your nose. As the smell becomes stronger, you see the bright blue waterfalls.

These waterfalls and the springs that feed them are rich in hydrogen sulfide (H2S), a naturally occurring toxicant that gives the water its milky blue appearance. To most organisms, this compound is lethal even at minimal concentrations, but here in Southern Mexico and across other parts of Latin America, species of livebearing fish have moved into these toxic springs and now call them home.

Aquatic environments rich in H2S are some of the most extreme habitats on Earth due to the toxic nature of the molecule. H2S disrupts the oxidative phosphorylation (OxPhos) function of mitochondria, the powerhouse of the cell, resulting in the inability to produce energy needed for cellular function and maintenance of homeostasis (Cooper & Brown 2008). To survive in these habitats, organisms push their limits beyond life’s standard boundaries.

The Atlantic molly, Poecilia mexicana, has served as a model for understanding how animals can survive in under chronic sulfide exposure (Tobler et al. 2018). The constraints that H2S toxicity places on cellular function allowed us to generate two hypotheses about what mechanisms may be important to survival in these extreme habitats: 1) organisms may mitigate the toxic effects of H2S by modifying the primary toxicity target cytochrome c oxidase (COX) and 2) organisms may regulate internal H2S concentrations by modifying the enzymes within the primary detoxification pathway, such as sulfide:quinone oxidoreductase (SQR) (Cooper & Brown 2008; Hildebrandt & Grieshaber 2008). Investigations of molecular evolution and gene expression identified modifications of both toxicity targets and detoxification enzymes, and functional analyses showed variation in COX and SQR function in sulfide-tolerant populations of P. mexicanathat are correlated with increased maintenance of H2S homeostasis and mitochondrial respiration in the presence of H2S (Greenway et al. pre-print; Kelley et al. 2016; Pfenninger et al. 2014).Through a macroevolutionary lens, comparative transcriptomics revealed that modifications of OxPhos genes and increased expression of detoxification genes convergently evolved in ten lineages of sulfide-tolerant fishes (Greenway et al. pre-print).

Our work so far uncovered what mechanisms allow these fish to survive in conditions considered inhospitable for most organisms, but it also raises questions about the origins of these lineages and the traits that make them survive in extreme environments. Did modifications of OxPhos and SQR occur after colonization of sulfidic habitats, or were these necessary precursors that facilitated invasion of these environments? Additionally, these H2S-rich springs and the nearby ancestral, freshwater habitats share no physical boundaries, meaning that H2S itself is the only barrier preventing other species from moving into these habitats. Why were only some species within these ancestral environments capable of moving in? Nick is a doctoral candidate and a 2020 EECG awardee in Dr. Michi Tobler’s lab at Kansas State University and studies the biochemical and physiological adaptations that underly tolerance to extreme environmental conditions. This work establishes insights into the limit of life’s ability to persist under inhospitable conditions and further explores the predictability of evolution across biological levels of organization. Nick received a B.S. in Integrative Biology from the University of Illinois at Urbana-Champaign in 2015. Outside of the lab, Nick enjoys baking, jogging, and playing board games with friends. Follow Nick online on Twitter (@Nickthyologist) and on his website.